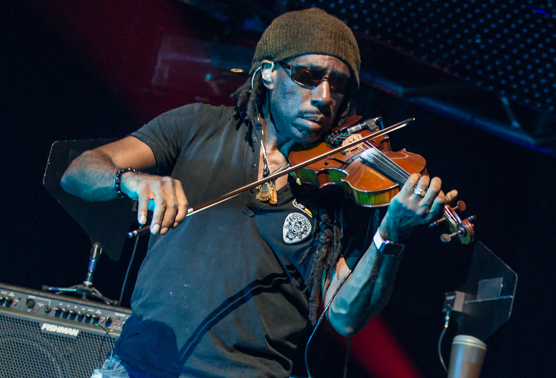 On what was once looked forward to as a yearly celebration, the eve of Dave Matthews Band's summer tour kickoff, a rather sobering bit of news grabbed the headlines and forced us to split our attention.

On Thursday afternoon, pop culture website Consequence of Sound published a story detailing a lawsuit that had been filed in Washington state on May 17th against Boyd Tinsley. The article goes into detail regarding the allegations contained in the lawsuit, filed by James Frost-Winn, a former trumpet player in Tinsley's band Crystal Garden. AntsMarching.org has chosen not to relay those details, as they can be found and read easily elsewhere, and as they are contained in ongoing litigation, they are as yet unproven.

Speculation about the details behind Tinsley's break from the band ran wild after he announced the night before their pre-Super Bowl show that he would be stepping away from the band for an indeterminate amount of time. Ultimately, the band (and by extension, it's PR arm) have remained silent regarding Tinsley's status, or how it would impact the upcoming tour. As recently as Wednesday, the band tweeted from their social media account, "Please join us in wishing Boyd Tinsley a Happy Birthday!" The lone word regarding the situation seemed to come as a response to the Consequence of Sound article, which quotes "a representative for Dave Matthews Band" as stating the following: "Boyd has been a member of the family since the band began and we want him to focus on his health and get better. We support his decision to do this and were sending positive thoughts his way." Things would take a turn just hours later. See below for an update - Ed. note

Late into the evening, multiple sites such as Rolling Stone, Billboard, People and Relix began reporting that another statement by the band had been released, this time with a different tone: "Though Boyd is no longer a member of the band, we are shocked by these disturbing allegations and we were not previously aware of them," the statement said. Parsing that statement, it's not too difficult to see that the band is clearly distancing itself from Tinsley, both past and present. What this changes in the dynamic of the band versus where things were on February 2nd are unclear. The facts that matter as far as the tour go remain the same; Boyd Tinsley will not be joining the band on tour this summer. It now sounds like he may never rejoin. We have reached out to the band for comment and will update this story if necessary.

Updated 5/20/18 at 7:50am PST: In the third paragraph, we pointed out the apparent dichotomy between two statements that the reader is led to believe were made just moments apart. Since then, Ants has learned that the original statement by the band's PR firm was in response to a generic question about Tinsley's status with the band, prior to the news breaking about the lawsuit. Consequence of Sound posed this question without context and thus were given the canned response. CoS's article doesn't make this distinction, and instead allows the reader to believe that both statements were made in the context of the lawsuit details.