The Sky Is Not Limited


Dave Matthews Band has changed my life - and it goes way further than just the music they create. This fall, they will be indirectly changing many other peoples lives as well. Back in 2006, I started a non-profit organization called The Sky is Not Limited. The goal has always been simple - to get people in dire need of clean water exactly that, through the use of solar power.

I credit the bands music as one key ingredient to the inspiration needed to create my non-profit and carry its vision to reality. After several years of hard work and dedication, that reality is about to come alive. On November 4th, I traveled to Tanzania to install a solar powered well pump for a village in the rural country side, four years after the ideas inception. This will be the first project for The Sky is Not Limited. Nearly all of the funds used to support this installation have come from other fans and their generous spirits at DMB shows.

The starting point for all fundraising began in 2007. I knew the good-hearted nature of DMB fans and felt as if their participation could help me jumpstart the organization. I drove to seven or eight shows that year, from Boston to Ohio to Florida. At times, I'd sleep in my drivers seat on rest stops along the highway to make it to the next days show. I knew it wouldn't be easy, but it is not always supposed to be. I had a sack full of homemade brochures, my Warehouse two string backpack, and big ideas. At that time, my only goal was to get people clean water. I had no idea of where or when, but knew that the first step was the hardest of all- overcoming fear of approaching people and asking for their hard-earned money.


After parking at the first show, Boston if I remember correctly, courage was tough to come by. I began questioning myself. How could I ask people for money without knowing a project was eminent? I took several deep breaths and reminded myself that I was not doing this for me, but rather I was doing this for those people who live in poverty. I knew I was in this for the right reasons and tried to convey that message to fellow fans. Walking around parking lots that summer, I received a whole host of responses. Many people asked where the organization does projects. Others questioned how we planned to get people clean water. Many donated.

I managed to raise $2,000.00 that summer by simply conversing with people. It became natural for me to walk around and talk to strangers, handing them a homemade brochure and just shooting the breeze. Often people would offer me alcohol, which I usually accepted. One could call it a perk of the job, but to me it was a reminder of how nice it was to give someone a drink, almost a reciprocation of my clean water idea.

In 2007, it was very good to see how many people felt the same compassion I did for really unfortunate people. Hearing DMB through so many car stereos within the lots kept my spirits high even while funds were tough to come by. Drinks were sometimes easier to come by than funds. Of course it was always people's right to decline to give and I always accepted that with a smile. All in all, it was peoples support that kept me believing that this dream could become a reality. One guy who gave me 5 bucks murmured to his friend after I walked away, I hope that money really goes to get people clean water. I heard him as I walked away, turned around and reassured him, I wont let you down.

The following year I managed to get the non-profit on tour with Reverb and the DMB. Things became official! I tried to create fun things to bring to shows to make the booth more interesting. Our table had candy, corn-hole games, free CDs and DVDs, and free water. It was so good to be able to have a booth presence where other fans could stop by and discover our ideas to help get people clean water. Even though the organization had the booth, I made it a point to still visit with fans in the lots, if nothing more than to just have some conversation, and hope to score a few bucks with the eventual goal to get someone a clean glass of water.

From 2008 to this past summer, The Sky is Not Limited has traveled with DMB and Reverb to gather support and funds to fulfill our goal. Nearly 100% of our funds have been gained while on the road with DMB and Reverb. We have raffled off prizes such as an iPad, a mountain bike, DMB tickets, and more. To date, we have raised more than $10,000.00 while on the road with the band. Now all of that money will be put to good use as I go to the African nation of Tanzania.

In March of this year The Sky is Not Limited purchased and shipped solar modules (for electricity), a solar pump, and electrical supplies for our first project. The goods are waiting to be installed in the Mkurunga district, South of Dar el Salaam, Tanzania. This solar clean water project will be the first of its kind in the area. People there will be replacing their diesel powered well pump with the solar pump. Fuel will come in the form of sunshine. Long, expensive hauls of diesel fuel into the village to power the existing well pump will become a thing of the past. Whenever the sun shines, electricity will be available to pump water from hundreds of feet below the ground into a large, above ground storage tank. Hopefully, this solar clean water project will be the first of many. 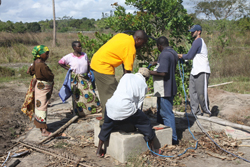 The trip lasted from November 4th to November 21st. I hope this will be proof of what good music, inspiration, and 5 or 10 bucks from a whole lot of people can do. Thank you to all of the DMB community!! The music of DMB has continued to be an inspiration in my life, which I always will project outward to improve the lives of those around me.


The views and comments expressed in this article do not necessarily represent those of antsmarching.org.