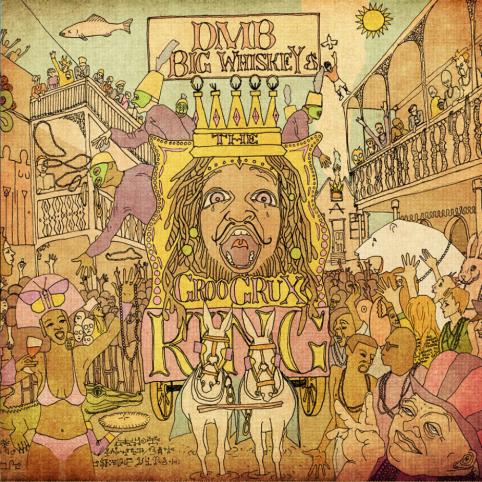 (Click image to see larger & past images.)
UPDATE 3: The band has released the cover art for the upcoming Big Whiskey and the GrooGrux King on their website. The pieces are not in order, but if you arrange them by dragging them around the complete piece of artwork will be revealed. Speculation is that the picture represents, at least in some way, a New Orleans funeral, a not-so-subtle hat tip to LeRoi Moore.

UPDATE 2: On the third day in a row a new piece of the album art has come out. We can now confirm that it's the album cover art and that there will be 9 pieces. Those of you that are frequent visitors may have seen some additions. We have been asked to keep those quiet in the spirit of the new album, so we pass that along to you guys too. Let's watch what the band has in store for us and let it play out as it should. Keep checking back with us for the next couple days and up to the start of the tour for the full excitement.

UPDATE: Well here we go. Another image as made its round on the internet a day after the first one. This time the image goes by the title 'panel9'. Is this another piece of a bigger image as we theorized yesterday? Or is this just a separate image. We'll leave that for everyone to discuss in the forums. We'll be sure to keep you guys up to date with any other images that make their way out.

Could this be the Big Whiskey and the GrooGrux King Album Cover? Well maybe. We aren't really sure. What we can say is this lovely image has found its way onto the Dave Matthews Band website with a title of 'whiskey'. We dont know much about the artwork for the album, but we do know via Dave that he had been scribbling album art, more specifically cover art. While we'll leave it to the art critics and historians to determine if this is a legitimate Dave Matthews original, it looks promising. It could be the cover, or liner note artwork. The image definitely has the New Orleans, Bourbon St. feel to it. The image also looks to be cropped with more going on in the picture then what we can see (and possibly we aren't supposed to see it by artistic design, or we are just getting teased with a portion.) Jump to the forum and let us know what you think!