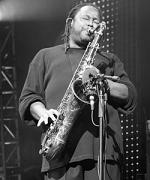 LeRoi Moore (1961-2008), 12 time nominated and 1 time Grammy winner, was shockingly forgotten by the Grammys. Lifetime musician, influential jazz saxophonist and one of the founding members of the Dave Matthews Band was left out of the Grammys annual Memorial Tribute. The Tribute is a video montage put together by the National Academy of Recording Arts and Sciences honoring those in the music business that have passed in the last year. A number of known (and not-so-known) artists (and a photographer) were honored in the video but LeRoi was missed (or skipped, we arent sure.) While we are disappointed and saddened that the Grammys and CBS did not give LeRoi the tribute he deserves, they do not properly represent the music industrys and the many billions of music lovers feelings. Although the so called National Academy of Recording Arts and Sciences did not honor him, we at AntsMarching.org will continue to pay tribute to his contributions. If you havent already checked it out, or you want to revisit, here is an amazing medley of some of LeRoi's top moments with Dave Matthews Band (featured in Podcast #15) and a tribute article titled Remembering LeRoi (both put together by AntsMarching.org's own Jake).