'Funny The Way It Is' clip, and Other New Info (UPDATE) 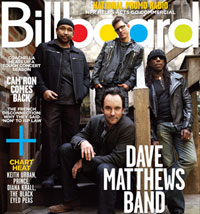 Fans have an opportunity to hear some of the first single off Dave Matthews Band's Big Whiskey And the GrooGrux King through an interview with the band. Billboard featured a short package on the band discussing the impact of Roi's passing on the band (it's very personal and candid by the band). Additionally, fans can hear Funny The Way It Is, Shake Me Like A Monkey, and what sounds like a sped up Sister on a 12-string. The first single should officially hit a radio near you on April 14.

Other related items, DMB makes the cover of the Billboard (Issue 15). Discussed in the article are LeRoi Moore's parts on the album. Moore's work is all over the album, culled from performances he had already put in for the project. "We created a giant ProTools file that had all of his parts, even if he was just tinkering around during a demo phase off-mic," Cavallo says. "We scoured the hard drives to find all of these moments he had."

Billboard: The band plans to make new material part of the set list and, as is typical, the "GrooGrux" songs will find a new life onstage. "We've played them all but we're going to have some extensive rehearsals before the tour starts - get them all oiled, lubed up and ready to go," Beauford says. "By the time we step onstage for the first show these tunes are going to be ready. By the middle of the summer, it's going to be a whole other story then, because most of the new tunes that we do always develop and grow into something fresh and new by the middle of the tour."

Radio Stations: Funny The Way It Is will be First Single

Numerous radio stations around the country are reporting that Funny The Way It Is will be the first single off Dave Matthews Band's Big Whiskey And The GrooGrux King.

The single will hit as early as April 14, according to radio stations.